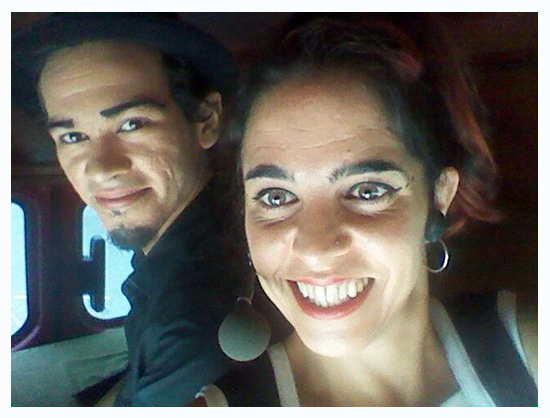 The beautiful story of this Spanish-Brazilian duo begins in the moment they met in 2006 during an open stage, circus varieté in Santiago de Compostela. Shortly after this union, they took the decision to combine in a show all of their knowledge and experience, setting the street as their best scenic area and looking for a direct communication with the audience. In 2007 they founded the Asacocirco Company, with Miriam Crespo and João Alvim as its actors. Several years before, they began the training in various circus disciplines, focusing on juggling as the main bond, and after mixing it with other types of art. Since this couple met, they did not stop acting, creating, traveling, laughing and even crying until they came up with a style of humor that has no borders and that captivates audiences of all ages. The first show, street circus, originated with the name of “Couple at Risk”, and after much experience working with the sincere public of the streets face to face, they were adapting and improving to achieve what is now called the “Asacocirco Show”. After that, they created the indoor show for theaters and auditoriums “The Birds Thief”, fruit of the union of drama with circus techniques and visual effects. The last show they created, made of pure action, danger and the essential humor, adopts the name used by the spectators of Soria (Spain), as “Circus of Fire”. Coming soon, the latest creation to be released on November 6, 2015, “BB Circus” in the Municipal Theater of Ourense, a family show, affectionately addressed to babies with live music and sonority, by Sergio Gomez Crespo, future member of the Company.